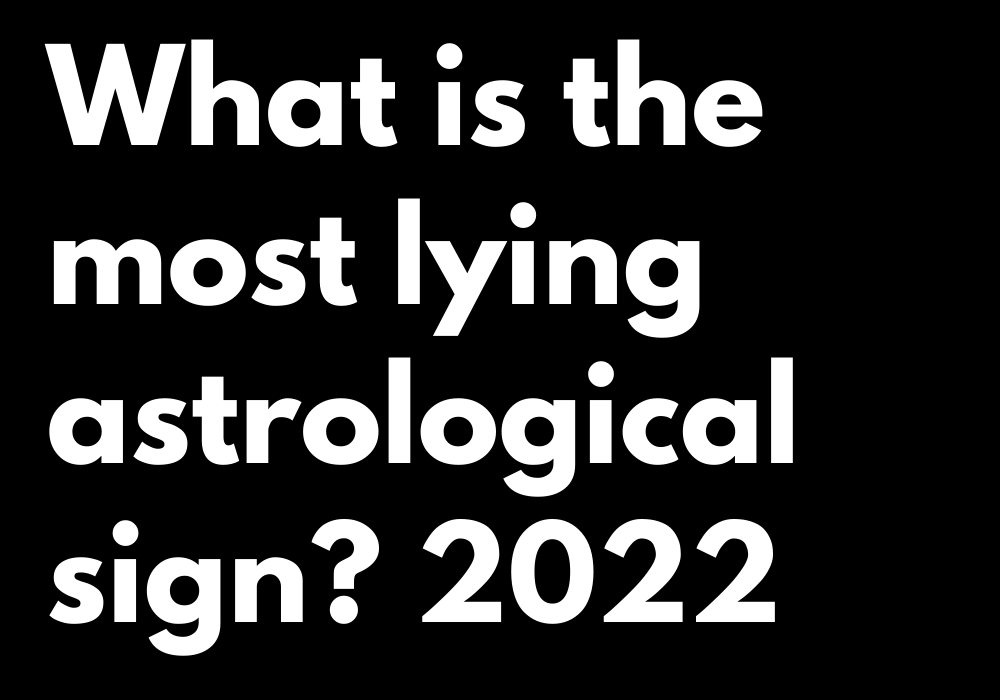 Was your partner born under the most lying zodiac sign?

Is your best friend a double-faced person?

Or are you yourself a deceitful person?

I know that the art of lying is not necessarily a good quality to have. Indeed, who can trust a person who is not able to tell the truth? When it comes to your partner, friends or family, it can quickly become a problem.

You don’t know which foot to dance on anymore because you can’t tell the difference between their mask of honesty and their toxic mask. In these cases, it is impossible to create stable and healthy relationships.

Which means that you cannot build a secure and peaceful future with these people. This is where you may wonder who the most lying zodiac sign is. Indeed, you want to know where you are with your loved ones.

But the art of lying can also be beneficial, if used for a more glorious purpose. For example, in the workplace, this can be an advantage, as it helps you hide your motives and find out what others think and want from you.

The “honorable” mentions: the most lying astrological signs

We all lie. Whether it’s to get out of trouble, to look more awesome than we actually are, or just because it’s an addiction we can’t live without.

In short, everyone lied at some point in their life.

But if that’s absolutely true, no matter how much you scream into the void right now that you’ve never lied, we all agree that some people lie more than others. And as to who lies the most, it has a lot to do with astrology.

While no sign is completely free from occasional lies, the most lying star signs can be found in the list below.

Much like Cancer natives, Aquarians don’t lie to hurt others or get what they want. Most of the time, their lies are not meant to cause significant harm to others.

In most cases, Aquarians lie to maintain harmony and avoid hurting others.

This is indeed kind of them and most of the time their lies don’t hurt, but in some situations those lies can backfire when the truth comes out.

Their lies are just a sort of band-aid, until someone dares to speak the hard truth. But they are still part of the list of the most lying astrological signs.

Yes, Cancer is a good liar, but unlike the other signs on this list, they don’t use their lying skills to hurt others or achieve their goals.
When it comes to their lies, it’s more about their inability to see the true side of events and their tendency to exaggerate.

Sometimes they just lie to make their story more interesting to others. There is no manipulation and their friends are used to listening to their stories which are usually a bit exaggerated.

And their friends love them. So, although they are on the list of the biggest liars in the zodiac, their lies are generally harmless. And entertaining, too. So Cancer isn’t really the most lying astrological sign.

Libra’s magical combination, which is both charming and manipulative, makes her a great liar. People born under this zodiac sign lie to look cooler, to get out of trouble, to get a job, to achieve their goals, for fun, etc.

Basically, they lie all the time. Which could earn them the title of the most lying astrological sign.

In fact, they would be the queens (or kings) of lies, but their indecision makes it almost impossible for them to keep track of their many lies. They tend to change the small details of the lies they’ve already told and people start to notice this pretty quickly.

So, they often have a different set of lies and each is as believable as the last.

We often tend to think of Pisces as the most lying astrological sign, but it is not.

Most astrology enthusiasts tend to think of them as sensitive souls, with a big heart and gifted for art, but beneath that guise are little devils who lie to achieve their goals, climb the career ladder or even make friends.

Thanks to their sensitivity and ability to be more intuitive than other signs, Pisces know exactly when and how to lie to get what they want in every situation.

They are more convincing liars than Gemini. The only reason they’re not at the top is because they don’t lie as often as the most lying second and first star signs.

No, the most lying astrological sign in the zodiac is not Gemini!

Gemini are the second best liars in the zodiac, the only sign that can beat them in the art of lying is of course the zodiac’s greatest manipulator.

But they’re definitely adept when it comes to deception and manipulation.

There is, however, one small detail that keeps them from competing with the most lying first star sign: Sometimes their lies are so obvious that people know they are lying.

But because they’re so fun, creative, and charming, everyone accepts that this is part of their personality and rarely appeals to them, even when their stories are blatantly fictional.

Whoever tells a lie says a hundred.

So who is at the top of the podium for the most lying astrological signs?

The Scorpio, of course!

When it comes to liars, Scorpios are at the top – honestly, does that surprise anyone?

They are the most manipulative, mysterious, cunning, and deceitful members of the Zodiac family. Sometimes lying feels even more natural to them than telling the truth – they’re so good at it that no other sign can match – yes, even Gemini natives who are second best on this list.

Their only problem is that they are almost too good. After a while, they sometimes have a hard time distinguishing fact from fiction.

Courageous, ambitious and loyal, you might think that these characteristics don’t make Scorpio the most lying sign. But it is nevertheless the case.

Perhaps it is their secretive nature and their jealousy of others that makes him one of the most prolific liars in the zodiac. It is the driving force that prompts them to use untruths to achieve their goals, while paying no attention to the feelings of those around them.

Manipulator and deceitful, Scorpio is a zodiac sign who excels in the art of lying.

How does the most lying astrological sign behave when it is deceitful?

Scorpios like to think of themselves as the most honest and trustworthy person you know, and they’re usually right. Scorpios don’t like associating with bad apples let alone being known as such, so why would they try to lie to you ?!

Ok, we get it, Scorpio “hates” lying. But that doesn’t mean anything, because he’s the king of this art!

When Scorpio lies, they’re actually very good at being convincing. It’s only when you start asking him questions that he gets really nervous. He’s very likely to quickly get on the defensive when you start delving into what he believes to be a straightforward lie.

In fact, if it goes down a notch, it will be believable again.

But how does the most lying astrological sign in the zodiac react when you lie to it?

For a professional lies, Scorpio does not live very well when you return the favor!

Whether they decide to burn bridges over the lies or not, Scorpios don’t waste the opportunity to speak their minds. As a water sign, he tends to let his emotions make the decisions for him.

So when he finds out that someone is lying to you, you can’t help but tell… the truth. A shame! So, Scorpio shares the emotions they are feeling at that time, before wiping that person out of their life. 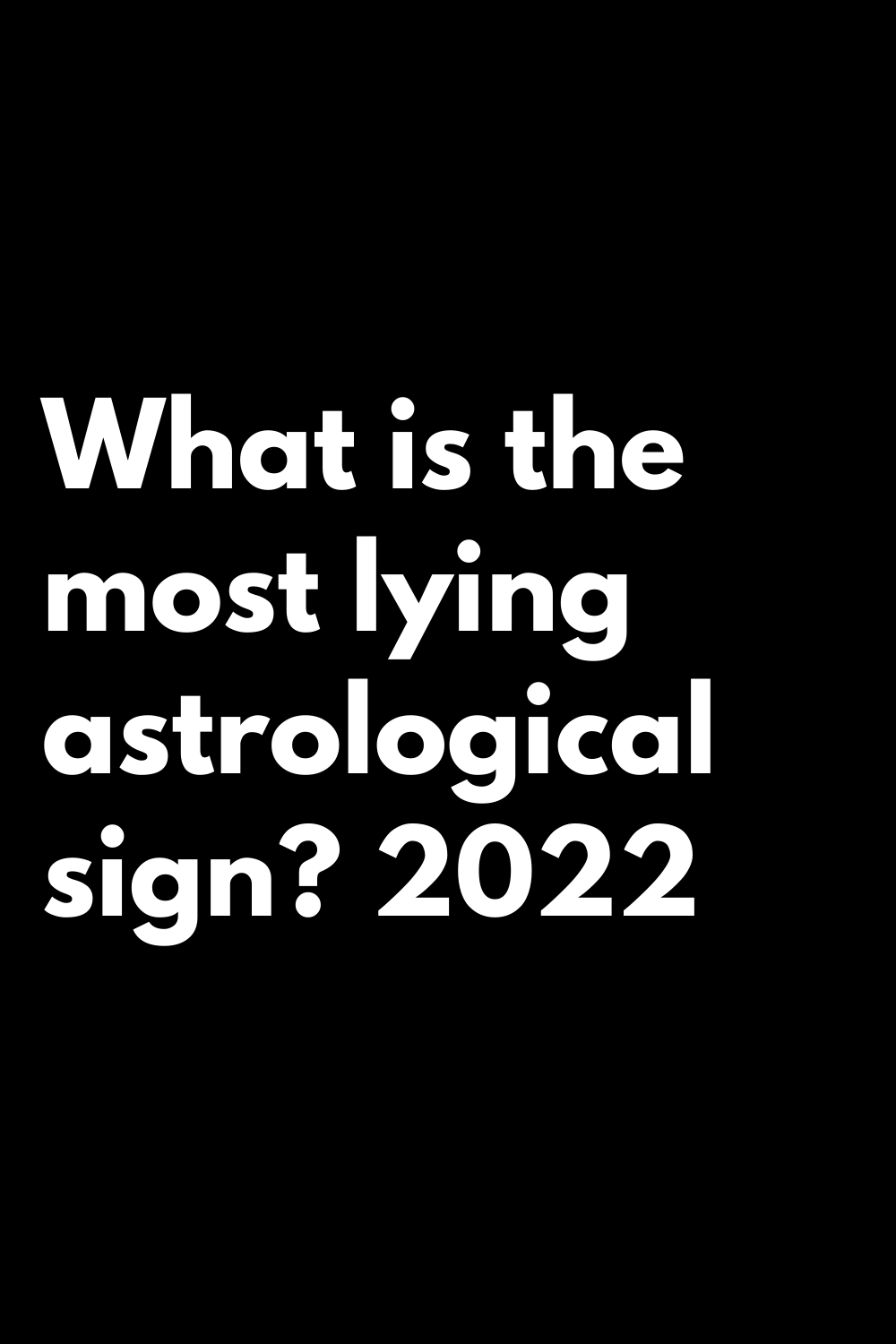 4 ways to make a narcissistic Aries dance to your tune

Hidden potential: 4 women of the zodiac who can become the most desirable